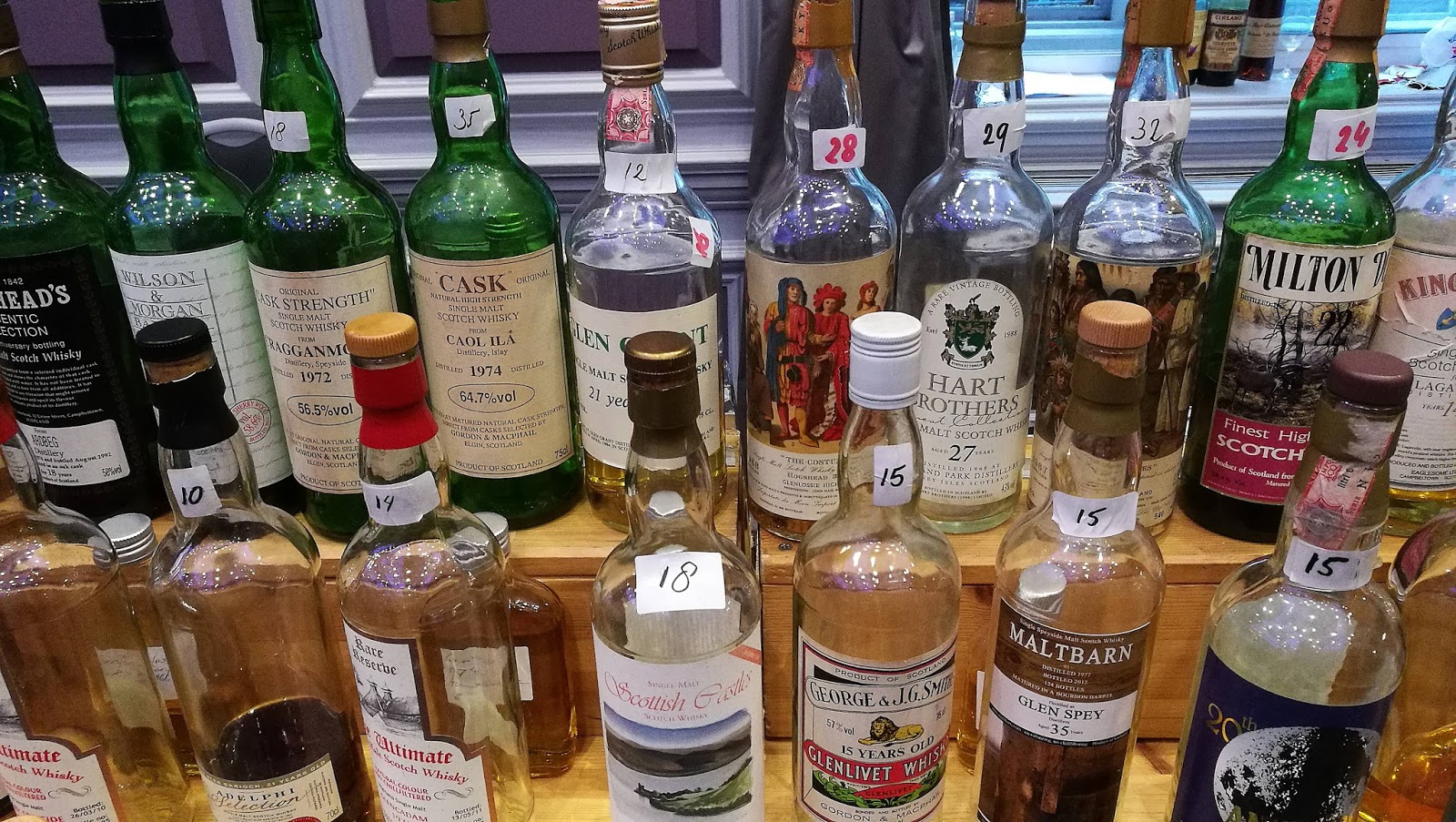 February heralded the debut of the Whisky Exchange Show north of the border assisted by an assortment of collectors, auction sites, world class bars and connoisseurs. Base camp for this weekend raid was the Grand Central Station set in the heart of Glasgow. A ticket price of £100 ensured access for a day along with £50 in tokens to spend plus a glass to enjoy those purchases.

The whole event kicked off at 11am with the sublime Old& Rare 101 master class that I’ve already covered, representing one of those once in a lifetime whisky tastings. The corridor to the main event was heavily populated with eager whisky enthusiasts waiting for the green light at the allotted time. After the conclusion of an exceptional master class, the corridor was relatively calm. Depositing my jacket in the complimentary cloakroom and suitably adorned with the wrist pass, it was time to spend and broaden my whisky experience.

The token system was divided into white and black coins that represented different values and cash was also accepted at all the stalls. The general consensus was that after spending your initial £50 in ticket tokens you just reverted to cash only transactions that seemed easier for the vendors. The only downside to this aspect was given the pricing of some of the most infamous whiskies that could fetch over £100 a dram – fairly priced may I add – this wouldn’t leave you much scope for other purchases given the daily withdrawal limits from cash line machines. So looking ahead to 2018 and if the format is the same, I’d suggest stocking up in advance in notes or going into a bank. Given the sheer number of foreign enthusiasts attending this was probably only a limitation from local attendees.

Generally, I found the pricing of the whiskies to be fair given their potential values and the exclusivity of actually having the opportunity to experience such bottles. One vendor was already doing a 50% off Brexit offer that was proving popular and several bottles sold out promptly. There was a widespread selection and the pricing reflected this. Attending with friends you find that you get to try someone else’s selection and word of mouth soon became a useful indicator. If you really wanted to try a Brora, then you could start at the very top with the 40-year-old or find a younger alternative on another stall. In theory you could put together a vertical from one distillery or create your own once in a lifestyle tasting experience. The vendors it must be said were also very accommodating with sample requests. 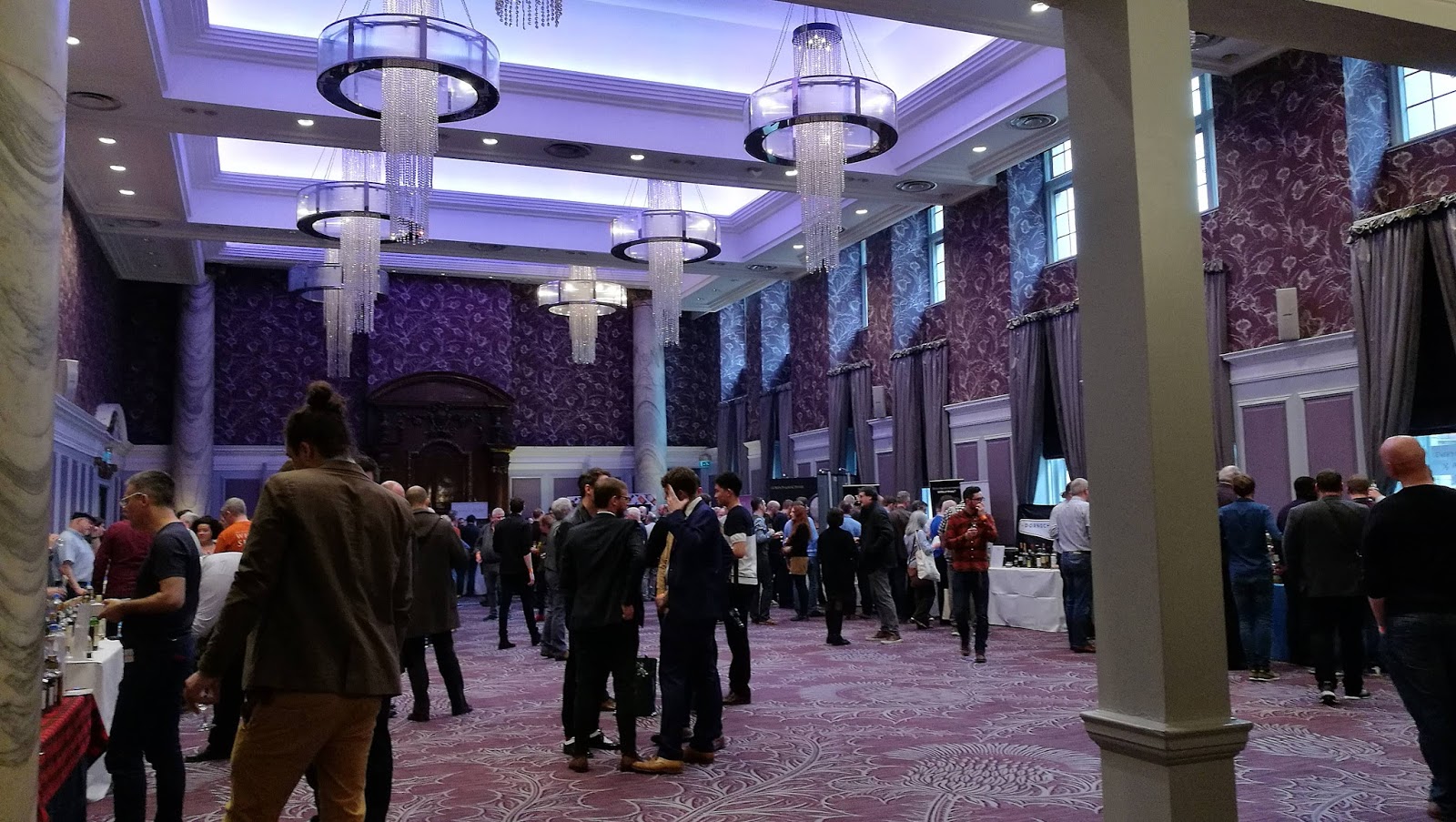 For the Saturday there was a feeling that the floor lacked more tables and chairs for enthusiasts who wanted to spend more time reflecting and appreciating their purchases, or just engaging in conversation. From photographs taken on the Sunday this was already addressed; so that’s impressive and shows the desire from the Whisky Exchange Team to create a memorable environment. I’ll also say the decision to restrict numbers was a brave yet utterly worthwhile approach. You’ll all be too familiar with oversubscribed whisky festivals where the physical effort to reach the stall and then a dram becomes tiresome rapidly. By limiting attendee numbers, the floor was busy, but it felt far more relaxed and effortless compared to other shows I’ve attended. It was just the right balance for everyone at the venue whether on the floor or beyond a stall.
My preview article indicated the importance of planning and many did come armed with lists, or hit-lists of whiskies they'd like to experience. An area of improvement whether its at the venue or online is informing visitors what each vendor offers. Friends had scrawled down particular bottles but then arriving at the venue had to search online to track down the potential host. Unfortunately searching for the bottle provided details but not the vendor; so you then had to go through the stalls individually one-by-one. A minor point for what was a very successful debut show. I felt the exclusive bottlings were priced excessively and represented a missed opportunity. However the positives outweighed the negatives and having exclusive access to the Deli downstairs allowed attendees to take a break without too much thought.
Those wanting to know how many whiskies I tried on the day will be disappointed. I actually lost count and the 1cl aspect delivered. Armed with my tokens and a large cashline withdrawal, I didn't spend any more and had a thoroughly lavish experience. Attendees on the whole appreciated the range on offer and it felt more like a celebration of whisky as opposed to a drinking session that has infected other festivals.
Being able to squirrel away some samples for this article and future reviews, I'm now able to give you a wee taste of the event with four whiskies. My own thoughts for 2018 and its hopefully return to Glasgow, would be to make a weekend of it and attend both days. Leaving the venue on Saturday I felt satisfied, but deep down I knew there were more whiskies in the hall that warranted trying. 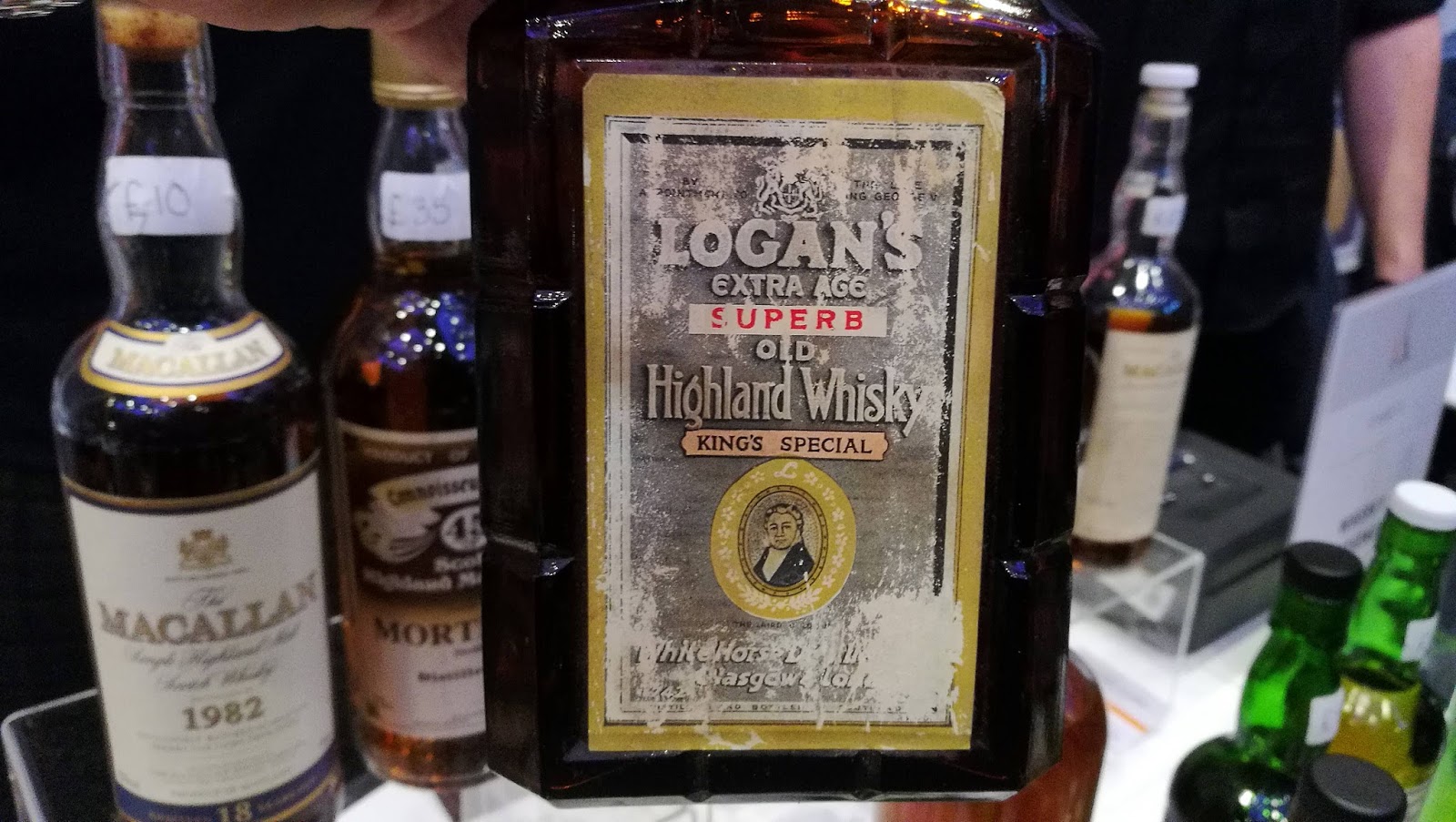 Bottled in the 1930's this blend features a heavy mix of Islay distilleries and was priced at £10.
Colour: creamy fudge
Nose: a punchy peat arrival, plenty of earthy notes with a touch of salt at the rear. Stewed apples, wafers with some pepper, all-spice and a refreshing lightness.
Taste: that lightness you often experience in these old blends its not forceful but restrained and elegant. A hint of the earthy peat and a caramelised feature. A dull vanilla moving into malted bread and very pleasant.
Overall: a very drinkable old blend that offers subtle features despite some heavyweight distilleries going into the recipe.

Forming part of the desirable Moon Imports Sea Series, this is from a Speyside distillery that many hold in high regard. From cask #319 and the price £12.
Colour: olive oil
Nose: a fruity array with a hint of wax. Plenty of pears and apples with a noticeable mineral element. Talc Powder? Then almonds and a little eucalyptus oil.
Taste: a gentle odyssey with more of those fruits and a weak black tea-like character. Candy cigarettes, ground almonds and a rather dry finish.
Overall: its not a Tormore but a lovely distillate and another excellent cask selection from this respected Italian importer. This was on the Dornoch Castle stall and if you haven't visited this bar then you should put that right sooner rather than later. 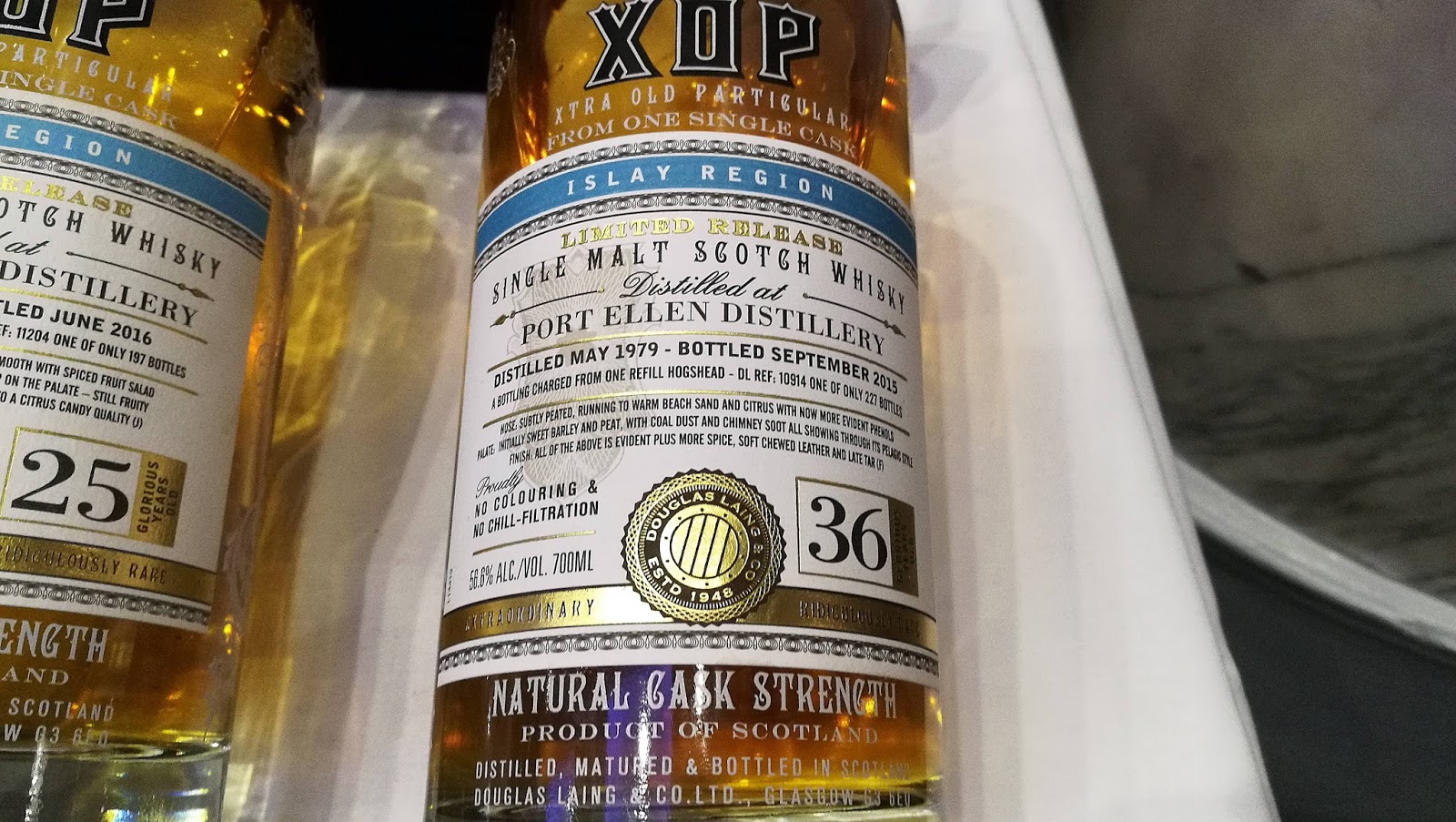 Bottled by Douglas Laing at 56.6% vol in September 2015, from a refill hogshead. This was priced at £15.
Colour: sunflower oil
Nose: a struck matchstick and a peaty decay then followed by pine cones, a medicinal aspect and paraffin oil. Bacon fat and pork scratchings, fennel and salted peanuts.
Taste: initially its Sugar Puffs and then golden syrup. Then the peat comes through with a real sweet and salty mix with an oily texture. There's charcoal, vanilla and a lemon finish.
Overall: this was a cracking dram and it was on sale at £1500 which is the price of Port Ellen these days. Some of the other bottlings Douglas Laing had brought along to sell had sold out, prompting a dispatch for more bottles. On the rollercoaster that is Port Ellen whisky, this was a real highlight and a very professional and friendly stall to visit. 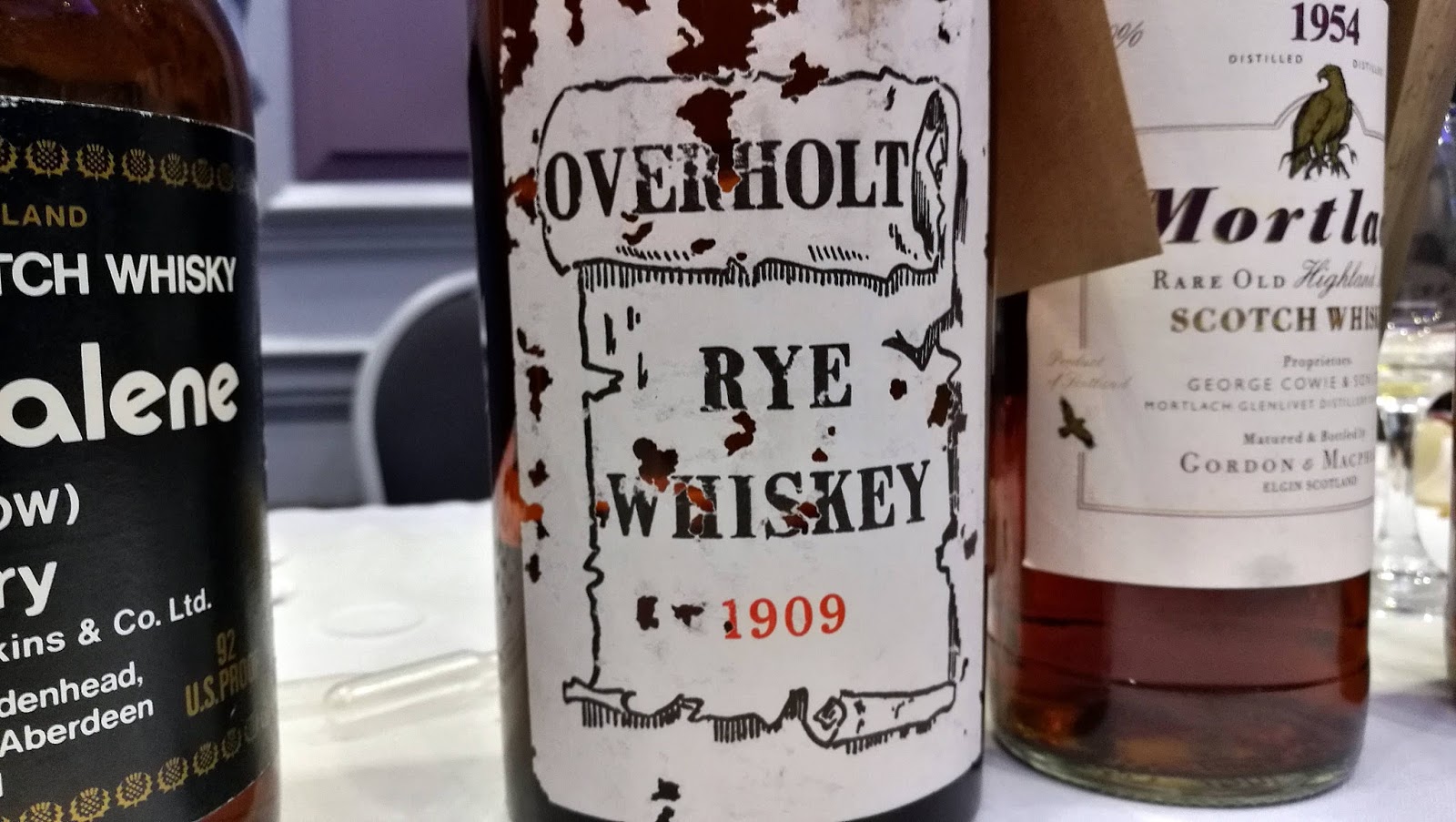 An opportunity to try something truly only for only £15. This was an incredible whiskey experience and the bottle ran dry by Saturday afternoon when word spread across the floor.
Colour: tobacco
Nose: more of that tobacco followed by subtle rye spices with cloves, black pepper and dark chocolate. A hint of toffee, some shortbread and aged bananas yet it feels like I've just scratched the surface here with marzipan and red liquorice.
Taste: very bold flavours almost a Black Forest Gateau with the cream, chocolate, sponge cake and juicy cherries. A little treacle, more of that rye spicing, black tea and tobacco. More confirmation the old ways and days were truly memorable.
Overall: this felt like one of the great whiskies from a bygone era. Speaking with Joseph Hyman on the Skinner stall, he actually has more bottles of this and was kicking himself for not bringing along another; perhaps next year? A word on his stall, as there were only 8 or so bottles but each wonderfully selected and priced. A definite highlight and proved that sometimes less is more.

A memorable experience and hopefully a successful one for everyone involved behind the scenes or the stalls. Roll on 2018 and more of the same.
Email Post
Labels: featured Glasgow Logans overholt port ellen speyburn the whisky exchange
Location: 99 Gordon St, Glasgow G1 3SF, UK