Review: SMWS B3.1 A little box of treasures 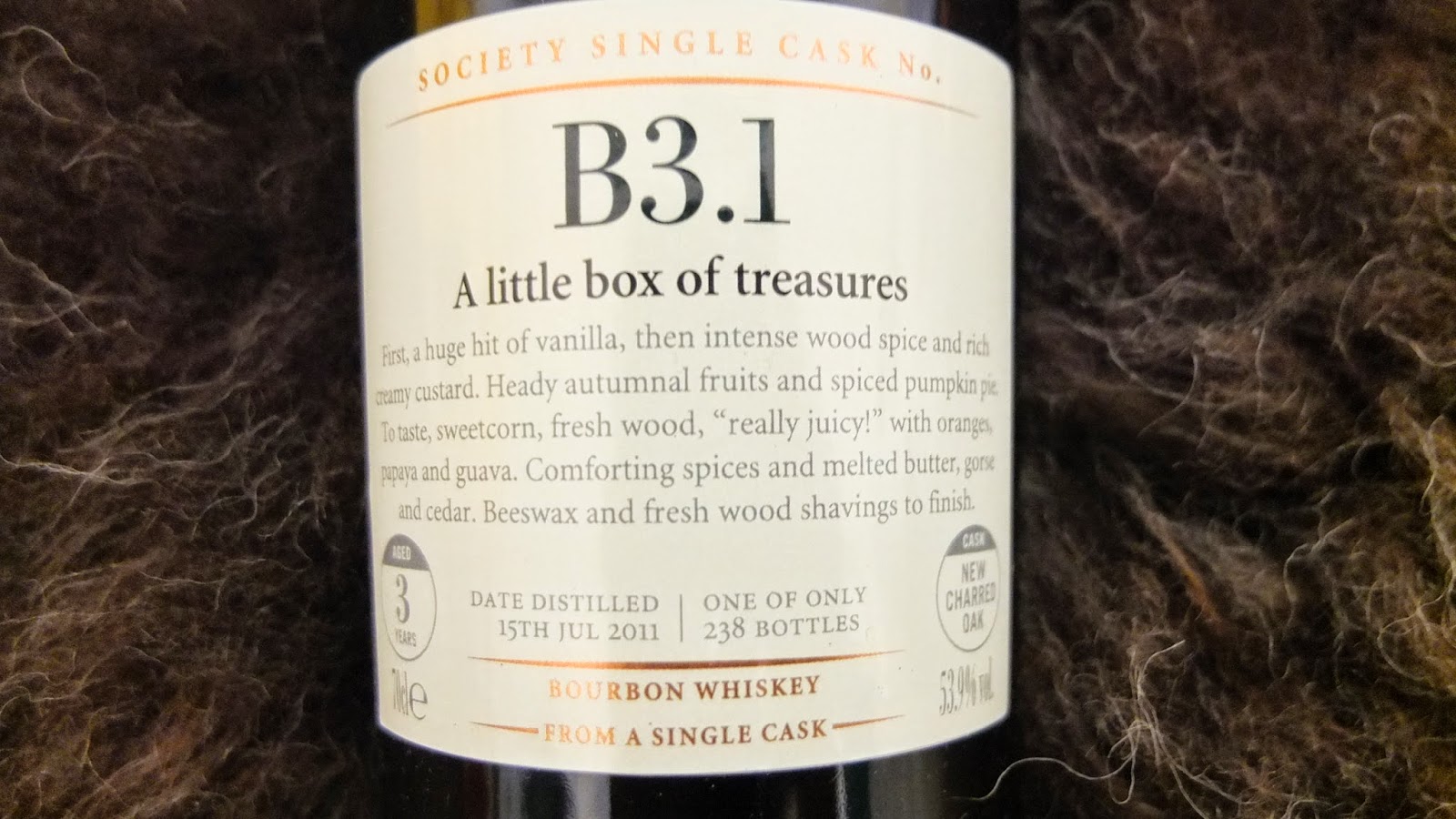 For the first time in several years, the Scotch Malt Whisky Society has bottled a cask of bourbon. As their characteristic numerical system confirms, this is only the third bourbon distillery they’ve bottled since being founded in 1983. The previous two distilleries for the record are Heaven Hill (B1) and Bernheim (B2). Given the boom Stateside in bourbon and craft distilling, it’s a surprise that this third distillery hasn’t come around sooner, or been bolstered by further releases.
This single cask release of was just limited to 238 bottles and prompted much debate about its origins. Well, it’s an open secret that this is hopefully the first of many releases from Rock Town distillery based in Little Rock, Arkansas. Now, while I haven’t tried any of their official releases (something I’ll be putting right shortly), I did cross paths with the distillery online via Twitter following the publication of Jim Murray’s Whisky Bible 2015. Possessing a copy of the publication a couple days prior to release, Rock Town asked me about the American section and I had to break the news they had won the award for American Micro Whiskey of the year for their single barrel reserve bourbon.
It’s great to give out such unexpected good news and the whisky world is a small place as a matter of weeks later I’m now in the possession of this SMWS release. I had tasted this one previously whilst in London with Malt-Review and we were both impressed for such a young age it offered more depth than we’d expect from a bourbon; not just the characteristic wood influence. Now armed with a bottle, let’s see if my initial impressions hold up. 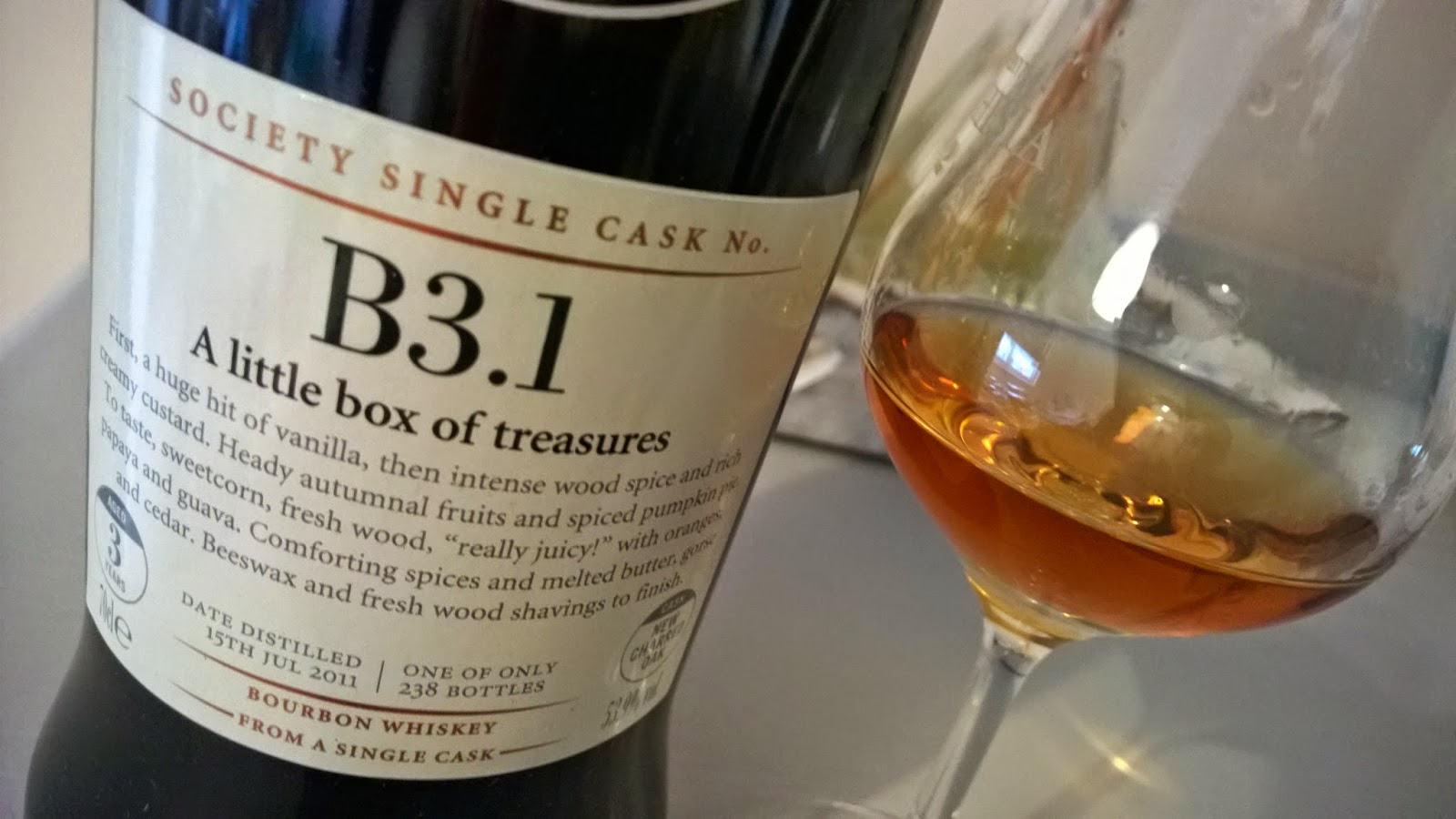 Nose: strong bourbon characteristics with the wood dominating; like being caught amidst a sawmill sandstorm. Beyond this dominant force, huge measures of vanilla. Patience is the key to this whiskey. Left to stand and with some prolonged nosing leather, beeswax, baked oranges, playdough and fennel come through. A very interesting nose that shows more character than bourbons twice its age.

Taste: more sawdust snorkelling with vanilla and baked Alaska. For bourbons of this age that normally is it from my experience with the virgin wood lacking any opportunity to add extra layers. Perhaps its the charring or distillation but there is a surprising vegetative twist on the palate and autumnal notes. Cinnamon awaits and of all things gherkins!

A word of warning when it comes to adding water. We did this at the London SMWS using a pipette to reasonable effect. Less is more with this B3.1, as add just a little too much and the dram becomes so muted its frankly remarkable. I've never experienced such an extreme reaction with so little water. This fella is extremely taut. Open up those robust muscles too much and the whole thing becomes a flimsy puppet.

In saying this I know both of us were impressed by this bourbon especially given its age. Further tasting at home confirms what an interesting experience this truly is - I'm looking forward to B3.2 already.
Email Post
Labels: Arkansas bourbon review rock town scotch malt whisky society smws taste whiskey whisky