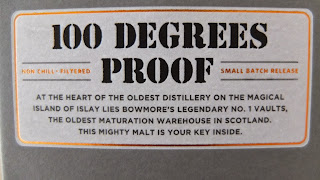 Bowmore is one of the great names of Scottish whisky yet when many delve into a bottle they are disappointed. Whenever I attend a whisky tasting, the distillery is rarely mentioned in conversation and when it is only in the context of how great it used to be.

I find this such a shame as the distillery offers the best tour that I've experienced to date and I've visited a few to say the least! As part of the tour I also enjoyed a few samples that day and it is good solid whisky but nothing spectacular lingers in my mind now about my tasting experiences. Yet standing in the number one warehouse, wandering amongst the casks and along the sea wall - hearing the waves crash against it from the other side - that was a marvellous moment. In many ways I want the whisky to match that experience and not dilute it. 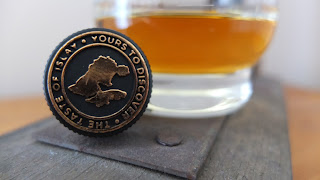 In 2013 Bowmore put together the Devil's Casks which had collectors scrambling in a frenzy to pick up on the limited number. Trying to acquire one of these was nearly impossible and if you did then the contents are sadly disappointing. I wouldn't pay the £200+ for what is an average whisky. So instead here we have the Duty Free Travel Exclusive (or whatever it is called this week) release that you can pick up in airports for around £49.99. This is cask strength Bowmore, non-chill filtered and for your cash you are also receiving a litre of the stuff.

I've written about it previously here as a new arrival but today we're actually tasting it. 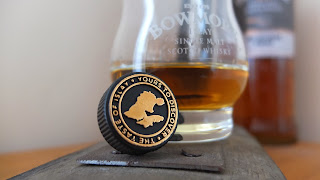 Colour: A light amber
Nose: Damp leather, sea salt, orange peel, vanilla, toasted oats
Taste: A hint of smoke, caramelised orange, honey, vanilla (once again), some subtle spices including star anise and cinnamon. Towards the end a brief flourish of what I can only describe as the brine from a tin of hot dogs and a faint hint of cut grass.

A great dram for a winter's evening, it possesses a open fire warming quality that delivers satisfaction and can be enjoyed without water, which is unexpected given this is cask strength. As a non age statement whisky it is predominantly young malt in here and that is highlighted careful composition of casks from Bowmore. Add a little water if you want to and more of that sweetness comes through.

The Bowmore 100 Degrees Proof is one of the more enjoyable duty-free-airport-travel exclusives and has more character and finesse than the staple 12 year Bowmore. A respectable price rounds off a strong offering and in conclusion this is one of the best examples of value at an airport near you.
Email Post
Labels: 100 degrees proof bowmore review taste travel exclusive whisky