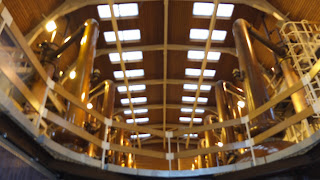 A rainswept Tain welcomed my first experience of the Glenmorangie distillery tour. Set just off the nearby A9 (the main Highland road), the distillery is very accessible and offers a brief introduction to the world of whisky and distilleries. Speyside and Islay may attract all the geographical plaudits however this corner of Scotland is home to Balblair, Clynelish, Dalmore, Glenmorangie and Brora, although a silent distillery it remains a must for any whisky enthusiast. 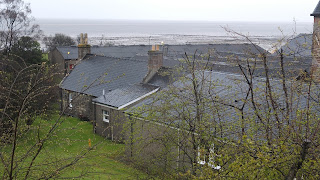 Glenmorangie resides in a picturesque setting and the buildings themselves fit in well with the image of a traditional distillery, even with a recent extension to boost productivity. Things start at the distillery shop where you can purchase tickets for the £5 tour which includes a dram of the staple 10 year malt. The shop is the perfect place to see the visual transformation of Glenmorangie under its new owners. The French giant knows the value in repositioning what was previously a very traditional and tartan influenced malt, into a luxurious, desirable item. Visually they have succeeded yet the nearby Dalmore retains the edge. 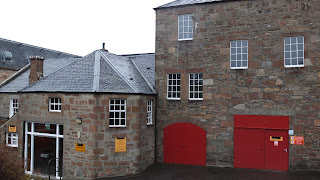 Merchandise and the full range of bottlings including limited editions are available here albeit slightly overpriced. The tour returns to this building for your taste of Glenmorangie conveniently right beside the shop! 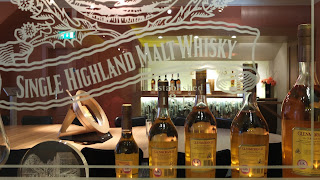 The tours are fast and furious at Glenmorangie, reminiscent of Glenfiddich as the timetable  sets a strict tone. Detail is lacking not because of any tour guide inexperience but rather the need to filter groups of up to 25 through the distillery. It is recommended that firstly you book in advance and that you arrive early to take in the short film and exhibits at the visitor centre before the tour commences as apart from the occasional wall plaque that'll be your most informative point of interest. 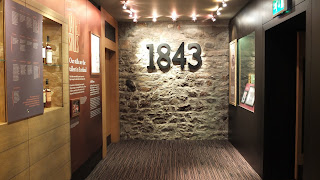 Glenmorangie follows Dalmore with a strict no mobile phones or cameras allowed. We are living in a health and safety excessive culture these days. I had hoped for a more liberal and visitor friendly outlook form Glenmorangie given that the same company owns Ardbeg, which was a joy to visit. However the rules are strict and a visible disappointment to our multi-national group, with one commenting that he would just have to "commit it to memory". 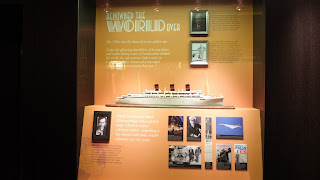 Given whisky is a huge attraction for Scotland I am often taken aback how unfriendly these tours can be. The Scottish Whisky Association is as I write this, spending considerable sums of money fighting the legal battle against minimum pricing. Such money could be put to better use bringing better exhibits, languages and interactive features to its members tours. 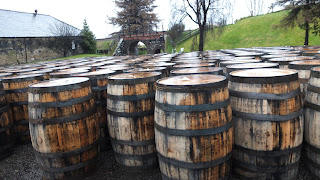 Moving onto the tour a brief chat about malt and milling ensues and Glenmorangie provides a first by only allowing us to hear rather than see the mill in action. Then onto the steel washbacks - I'm always disappointed when the wooden backs are missing, that's a little piece of character lost. Before you know it we are in the impressive still room where 12 of these characteristic giraffe stills reside. Not as vast as Glenfiddich it remains the ability to awe. Then it's off to the warehouse number 3 for a chat about the importance of casks and the opportunity to smell the cask influence on each of the main Glemorangie malts. 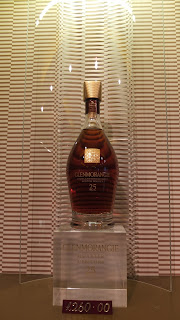 Ultimately this is a quick tourist tour for a passerby or a whisky virgin. It doesn't even warrant a midfield placing despite the quality of the malt itself. For £5 expectations are low and matched. Having visited the distillery several times over the a decade, there is a feeling that a slice of history has been glossed over by the rebranding. The concept of the 16 men of Tain may have been conveniently relegated due to the expansion and subsequent boost in employees. Yet a void remains and requires some restoration. My recommendation for a more informative and inspiring distillery tour is to visit Balblair just up the road.
Email Post
Labels: distillery tour glenmorangie whisky