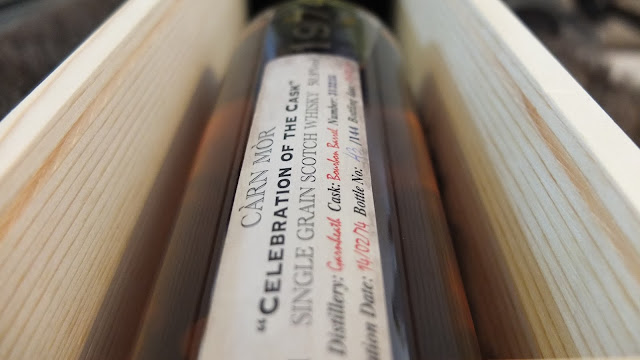 Friends argue I’m always treating myself but that’s what life is all about surely? Whisky is all about new experiences hence this Garnheath release from the Carn Mor celebration of the cask range bottled by Morrison & Mackay. When was the last time you laid eyes on a release from this closed Lowland grain distillery? Exactly; not one to miss out on.

Grain whisky has never been that fashionable until recently despite the best efforts of Mr Beckham to destroy any prospering signs with his exceptionally poor Haig Club concept. Grain whisky is best enjoyed, when what is essentially a very neutral spirit, after a prolonged period in the cask. This can take 20, 30 years or even longer and often the casks that are used by grain distilleries are refills or one stop away from their final resting place in your local garden centre. Time is key and that’s a feature the Haig Club lacks.

This Garnheath was laid down in 1974 when I would have been a wee sprog and oblivious to the incoming end of the whisky boom. The distillery was only in existence for just 21 years falling victim to the fall in whisky demand and sudden overproduction. Originally built on the site of an old paper mill in 1965 by Inver House Distillers Group, this complex also played host to 2 other very rare malt distilleries in the form of Killyloch and Glenflagler. Before being demolished in 1986, the complex was a huge statement of intent from the company with over 30 warehouses and 3 distilleries. Essentially the company would have been able to bottle single malts and use the output from the trio to support its blends. Killyloch was closed in the 1970’s making it one of the rarest distilleries before Glen Flagler closed in 1985.

Of course if you’re thinking of 3 separate distilleries, complete with buildings on this Moffat complex then that would be the romantic vision. Instead they were just a series of stills for the distillation of spirit; a set for each distillery. Very little is known about these distilleries generally and to add more confusion Islebrae was also produced at this complex  and like Killyloch was only in existence for just 5 years.  Islebrae was produced using the Killyloch stills and was more heavily peated and I’ve yet to see a bottle.

It’s regrettable how much we’ve lost to history, especially as this was only 40 odd years ago. Some companies take care of their archives and acknowledge the value this will bring for future generations. Others it seems are more content to bulldoze and destroy; leaving us with the odd picture or nugget of information. Truly some distilleries are more lost than others.

Colour: a runny honey, the sort in plastic bottles

Nose: lots of coconut flakes, almost synthetic in its presence like a Snowball with milk chocolate. Caramac, Milky bar; the real sweet end of the spectrum. Wood sap, maple syrup with a touch of spice, honeycomb, ginger beer and marizpan. With a drop of water its becomes more creamy and flashes of fruit loaf appear.

Taste: less detailed than the nose but has a rugged, if limited charm. Honey, banana, marzipan with lots of vanilla. The wood has been a strong influence here but there remains a balance. Strong, bitter dark chocolate with black pepper and tablet.

The first Garnheath I've tasted and it could well be the last. Moments like this don't come along very often. Time to reflect. This Carn Mor release is enjoyable and possesses a charm of its own unlike some wood driven grains today. I'd have never picked this out as being 41 years of age in all honesty. I'll just have to be content with releases from Cambus distillery (my favourite grain), speaking of which Cadenhead's are bottling one shortly...
Email Post
Labels: 1974 41 year old carn mor garnheath grain lowland review whisky